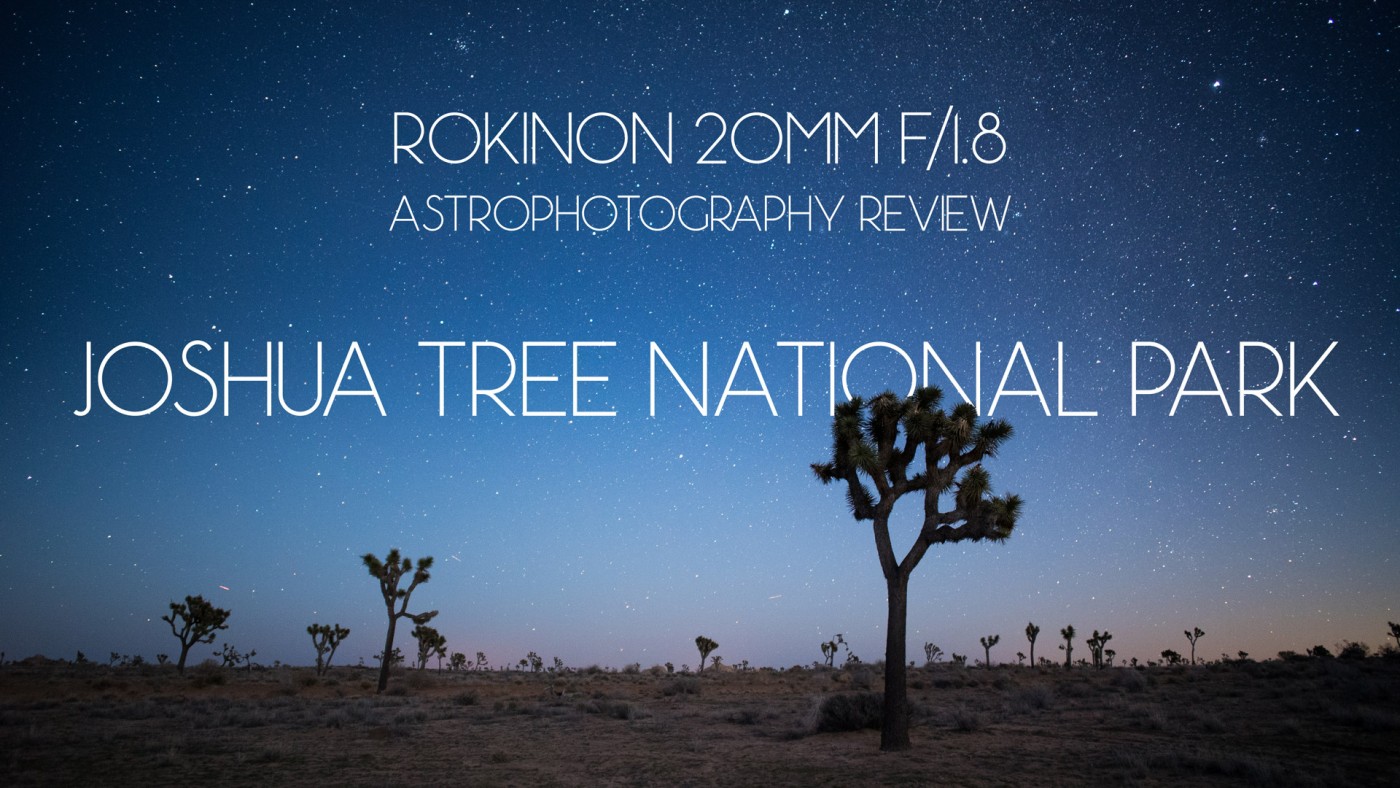 In this review, we put the new full-frame Rokinon 20mm f/1.8 to the test in Joshua Tree National Park, California.

For this review, I made a vlog of our trip to Joshua Tree and talk about the experience of shooting with the Rokinon 20mm f/1.8. Check out the 7 minute video here.

For a complete overview of the lens performance and full resolution image downloads, check out the complete written review below:

The Rokinon 20mm f/1.8 is the first full-frame 20mm lens from Samyang. With its f/1.8 aperture, and super wide angle field of view, it looks to be an attractive option for landscape astrophotography, at least on paper. 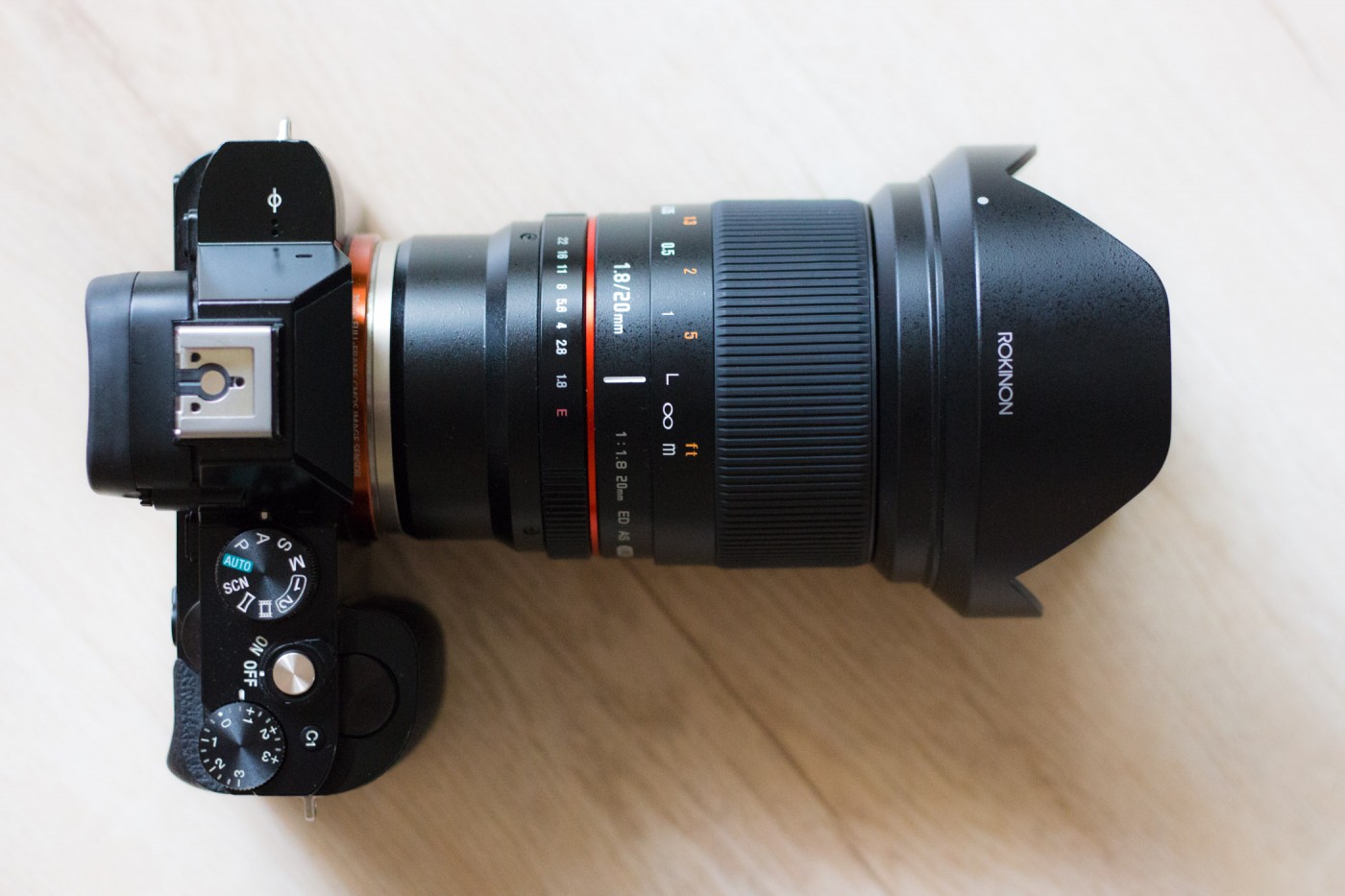 The Rokinon 20mm is a large, heavy lens, especially on the relatively diminutive Sony a7S. Since this lens was designed for DSLRs, it has a relatively long barrel extension on the Sony E mount version to make up for the reduced focal flange distance on the Sony mirrorless cameras. I imagine the lens looks a lot more balanced on a DSLR.

It looks almost identical to other Rokinon DSLR lenses like the 24mm f/1.4. Its lens barrel is mostly made of plastic and it has the typical speckled black finish and grooved rubber manual focus ring, just like most other Rokinon lenses. 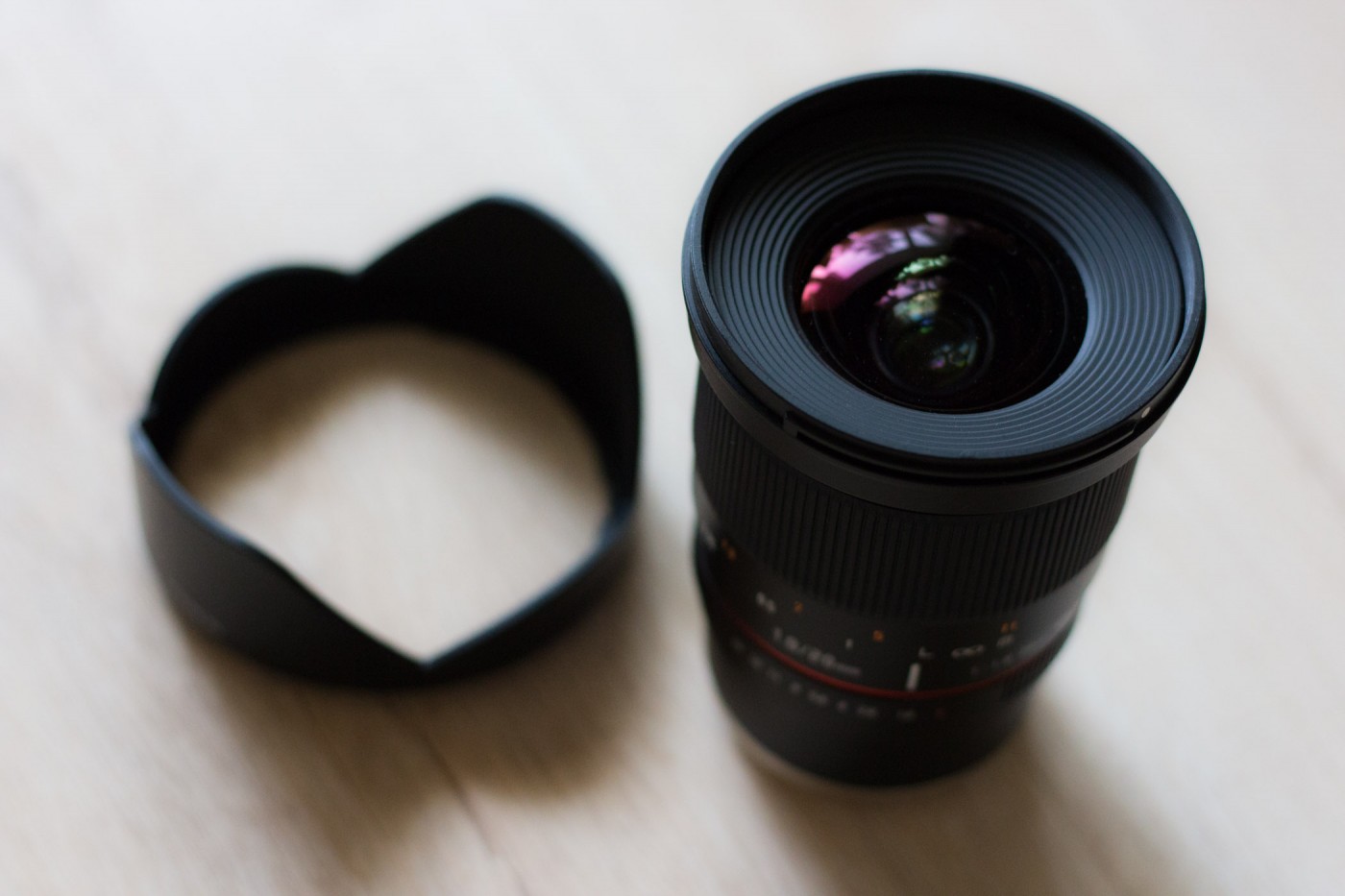 The aperture ring and manual focus ring both rotate with a very damped and smooth feel. The lens has detents at each half-stop of aperture setting. The hood is removable and reversible in typical fashion and the front of the lens accepts a 77mm filter.

This is an affordable, fully manual focus lens so there aren’t any more bells nor whistles to speak of. Let’s see how it does optically.

When shooting astrophotography, we like looking out for coma or other aberrations that will affect the shape of the stars, especially in corners of the image. And deviation from stars looking like pinpoints is undesirable. Lens designers are recognizing the increasing demand for lenses that have reduced aberration levels, especially as night photography is increasing in popularity.

We usually try to test lenses with our standard lens aberration test chart to see what the aberrations of the lens looks like. The test is performed by shooting an LCD with a test pattern of dots.

How our test works: The 4 dots in each crop of the chart should look like pinpoints. Any deviation from a pinpoint is an indication of aberration. In my test, aberration sizes are measured, in pixels, relative to the full-frame height and expressed as a percentage of the frame height. This makes measurement of the aberration in this test unaffected by camera resolution and allows comparison of performance across systems and sensor sizes. In general >1.5% is poor, 1.0% is average, 0.5% is very good and <0.3% is excellent. The test is measured in two places: in the center of the frame and the corner of the frame. You can read more about my aberration test and try testing your own lenses with our downloadable chart in my practical guide to lens aberrations. 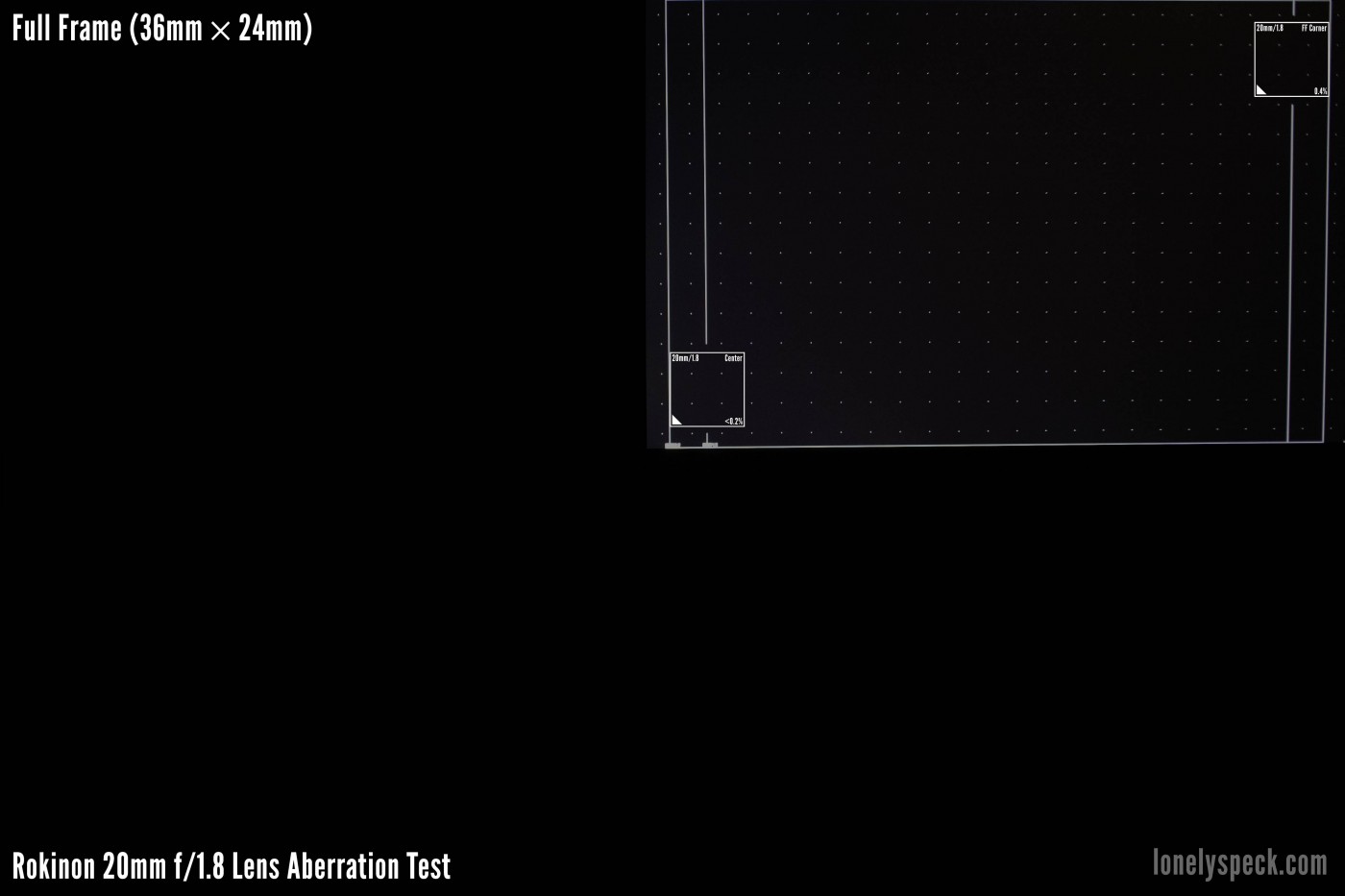 The complete view of the test chart is above. It shows that the Rokinon 20mm f/1.8 has very little distortion.  Looking at our 100% crops, the Rokinon 20mm f/1.8 shows relatively strong performance wide-open at f/1.8 but the corners do show a little bit of  aberration that make the points of light look a little stretched. It’s not bad, but not perfect. 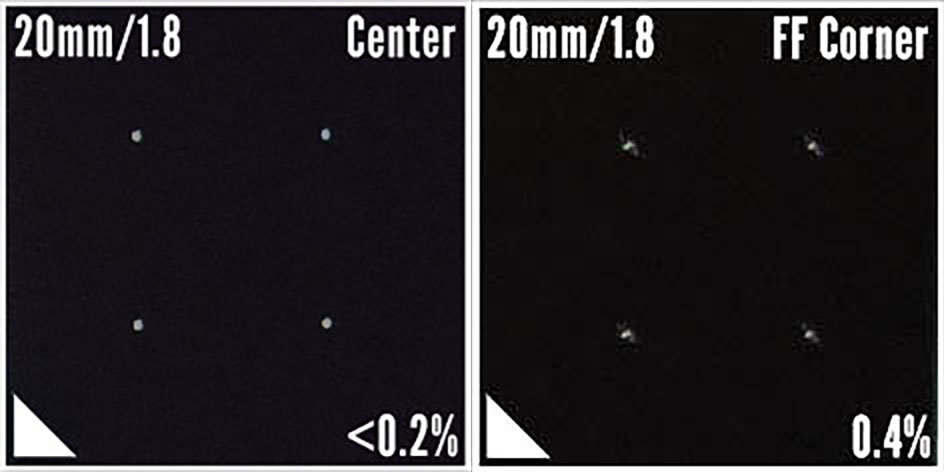 When the lens is stopped down to f/2.8, the aberrations in the corners are reduced until they’re almost completely gone. After using the lens in the field, I think that the aberrations may be a product of some field curvature that mostly affects resolution in the sagittal direction. Stopping down reduces the aberrations by increasing the depth of field a bit. 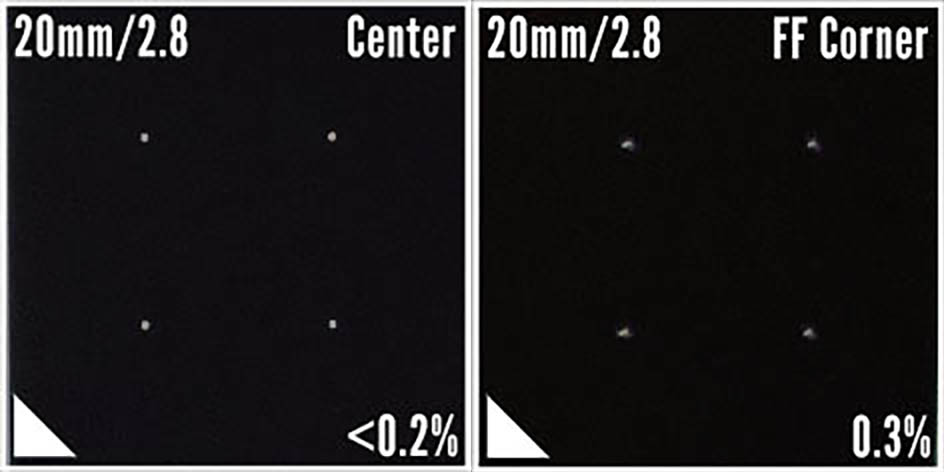 Overall, the performance of the Rokinon 20mm f/1.8 very good for the price. Yes, it’s not perfect at f/1.8 but it’s really not that bad either. Having the option to use f/1.8 when noise is a concern is invaluable and the fact that the aberrations almost completely clear up at f/2.8 means that it can offer similar performance to one of my favorite lenses in the 18-20mm range currently: the Zeiss Batis 18mm f/2.8. Did I mention the Batis costs almost a thousand more? Sure the Rokinon has no autofocus, no depth of field scale, is larger and heaver. But optically, it’s pretty good, especially when stopped to f/2.8

Okay, I think pics of dots on LCDs are boring. Let’s move on to real world shooting.

I used the Rokinon 20mm f/1.8 for two nights of shooting in Joshua Tree National Park in California. I mostly shot the Joshua trees along Geology Tour Road, right in the center of the park. Since we visited in February, the galactic center was not visible in the early evening so I made it the goal to capture the trees with the Constellation Orion in the background.

Early shots wide-open at f/1.8 show that the stars look pretty much all like pinpoints, except for the bright star Sirius in the upper right corner that barely shows a little stretching. Closure scrutiny shows that the corners show aberration shapes almost identical to our aberration test above.

Otherwise, initial results at blue hour looked pretty good. The aberration level is low enough to not be very apparent when viewing the image as a whole.

Looking the other direction, a bit further after dark, the light pollution glow from Palm Springs was relatively strong. Luckily, in the sanctuary of the national park, I still managed to capture the Andromeda galaxy, a fuzzy spot visible just to the right of the Joshua tree in the photo above. That’s Venus on the left. The f/1.8 aperture gathered plenty of light to still maintain some detail in the foreground, lit only by sky glow from the distance light pollution.

Once it got fully dark, I concentrated on trying to capture the constellation Orion. Orion contains some of the brightest stars in the sky and it also features colorful nebula including Barnard’s loop, a faint pinkish red band of gas dust that surrounds the stars of Orion’s belt. Barnard’s loop is relatively hard to photograph because it’s rather faint. It requires a fair amount of light gathering to come through in a photo so here I used the PureNight light pollution filter, and a process of stacking 4 exposures. Another attempt at f/1.8 and with a few more exposures and some alternative processing using an LRGB stack gave even better results:

The following night, I set out on a mission to make a hyperlapse of a Joshua Tree. certainly not an easy task in the pitch black, but the relatively fast lens does make it possible to see a lot of detail on the live-view feed of my Sony a7S. I go over the rather tedious process of shooting a hyperlapse in the video review of our trip at the top fo the post. The first hyperlapse sequence was interrupted by a truck driving down Geology Tour Road. It ruined my hyperlapse but did yield a pretty cool shot when the truck went by.

And for my final shot of the review, a frame from my second hyperlapse attempt. In this one I started away from the Joshua tree and then slowly walked towards it until I was about 2 feet away, staring straight up at its branches against the sky. Not my typical landscape shot, but I thought it was fun. This final shot is actually indicative of the field curvature that I believe is causing the small amount of aberration at f/1.8 visible in our testing. The photo was focused on the tree so the stars behind it are slightly out of focus… except for the ones on the edge of the frame that actually appear a little sharper, a clear indication of mild field curvature.

I think I’m happy with the short nights that we spend in Joshua Tree with the Rokinon 20mm. The conditions were particularly cold so I felt like I didn’t have as much time shooting as I would have liked. Nevertheless, I’m happy with the performance of the lens and I’m especially glad I got some successful shots of Orion.

We received the Rokinon 20mm f/1.8 as a temporary loaner from B&H for purposes of this review. Thanks to the B&H team for making this review possible!

While it does show some signs of aberration or coma at f/1.8, the aberration level is not very bad and it clears up almost completely by f/2.8, offering a sweet spot for night photography that has reduced vignetting and sharp images from edge to edge. If you don’t mind the fully manual nature of the lens or the relatively large size, the Rokinon 20mm f/1.8 offers a lot of value, especially when compared to other fast 20mm lenses.

Vlogging equipment for the video review: