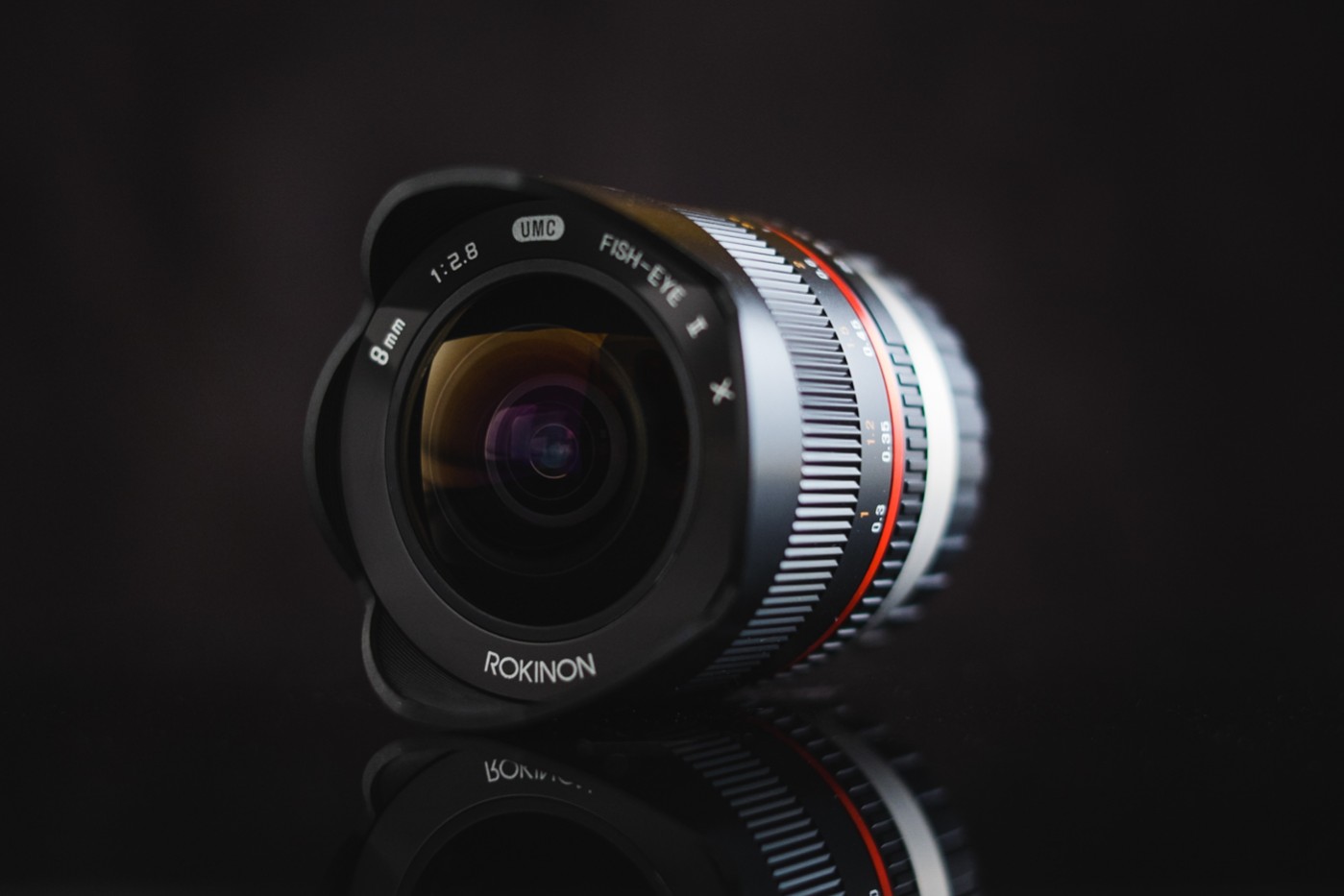 The Rokinon 8mm f/2.8 UMC Fisheye II is a dedicated mirrorless camera lens design, meaning it won’t fit on your standard DSLR and is instead made for the new compact system lens cameras that manufacturers have started offering in the last few years like the Sony a6000 and the Fujifilm X-T1. You can find the same lenses under other brand names too: the original manufacturer is Samyang and their lenses are available under the names Rokinon, Bower, Walimex and a few others.

When I first dove into the world of mirrorless cameras, one of the first lenses I used was the original Mark I version of this fisheye lens: the Rokinon 8mm f/2.8 UMC Fisheye. I had only limited experience with the older lens and didn’t really own it long enough to make a complete review. Now Rokinon/Samyang have released a new Mark II version of the lens. I really enjoyed the short time I had with the original version so I grabbed the new Rokinon 8mm f/2.8 UMC Fisheye II version as soon as it was released. It’s available for a wide variety of camera mounts including Canon EF-M, Fujifilm X, Sony E, and Samsung NX.

The first lens that I received was a bad copy. It showed a distinct decentering effect which caused the whole left side of the frame to be noticeably blurry compared to the rest of the image, particularly when used wide open at f/2.8. Unfortunately, I had departed on a road trip only a day after receiving the lens and didn’t notice the problem beforehand so many of the photos that I was able to take for this review were made with the bad copy. Upon returning from the trip, I promptly exchanged the lens for a new copy that does not seem to exhibit this behavior.

So, just keep in mind that some of the nightscape photos in this review were taken with the bad copy but I still loved the images enough to post them here. If you plan on buying this (or any) lens, definitely do a quick test  by shooting some photos with it at each f/number and evaluate its sharpness to make sure it’s up to par. Rokinon lenses are great lenses at low prices but also probably have some less stringent quality control standards than the bigger manufacturers so a few duds might slip by. Amazon.com and B&H Photo both have excellent return policies if you get sent a bad lens so be sure to use their return policy if you need to. Any time I have needed to make a return, they have always promptly issued a replacement and provided a shipping label for the return, free of charge.

While it’s definitely larger than the Mark I version, it’s still a very small lens. It’s the smallest lens currently in my Fujifilm camera bag. Despite its diminutive size, it’s still rather weighty and feels very dense and solid. It mounts firmly and feels very high quality. Here’s a photo comparing it to the Fujifilm 14mm and 23mm lenses just so you can see how small the little Rokinon actually is. Neither of the Fujifilm lenses are particularly large lenses but they make the Rokinon look tiny.

With the extremely wide field of view of this lens (180 degrees from corner to corner), Rokinon opted for a built in petal style lens hood. As a result, the lens requires the use of a cylindrical lens cap, not unlike the Rokinon 14mm f/2.8 (my review). It’s less of a pain than the really huge lens cap of the 14mm though because it’s still small enough to fit in your pocket, just not quite as comfortable as a standard flat lens cap.

The Rokinon 8mm f/2.8 UMC Fisheye II is a completely manual lens. It has no autofocus motor and the aperture diaphragm must be operated manually with the aperture ring. It also does not have any electrical contacts on the lens mount so it cannot communicate exposure or lens information to the camera. Manual focusing with a lens of this short a focal length is pretty easy though: just leave it at infinity for 99% of your photographs. The depth of field is large enough, even at f/2.8 that everything from about 3.5 feet all the way out to infinity will be in focus. I found that my good copy had a nice accurate focus ring, making it easy to focus at infinity for photographing the milky way.

I shoot with this lens primarily at f/2.8 for night photography. Even wide open at this setting, the photographs are tack sharp in the center with only mild sharpness decrease in the very corners of the image. Here’s an image taken at sunset with 100% crops to show you the sharpness. For reference, these were processed with Iridient Developer set to R-L Deconvolution with a radius of 0.4 and 6 iterations. This photo was pushed a couple stops to bring out shadow details for this test so the results might have a tad of extra luminosity noise from a typical ISO 200 shot.

Looking at the center crop, the lens picks up some very fine detail in the branches of the trees.

At the far right center edge of the frame, you can see the details start to soften just a bit but still remain very sharp. In the image below you can see signs of red and green chromatic aberration on the edges of some of the trees.

And finally, in the extreme bottom right corner of the image, you can see the road details start to lose resolution but some of this might be due to focus depth of field. Overall I’m very impressed with the sharpness of this lens, provided you have a good copy.

In harsh lighting conditions, particularly with the sun on the sides of the frame, the Rokinon 8mm f/2.8 UMC Fisheye II definitely exhibits some elaborate looking flare, particularly when stopped down. Bright highlights make 6-pointed stars when stopped down due to the 6-bladed aperture design.Flare becomes less noticeable at low f/numbers but is still present. Here are a couple sample images where I intentionally tried to get the lens to flare. Pardon the motion blur, I was shooting from a moving open-air bus.

Coma performance of the Rokinon 8mm f/2.8 UMC Fisheye II is excellent. There are very few signs of coma at the edges of the frame, even wide open at f/2.8. This characteristic makes the lens particularly nice for astrophotography because it keeps the stars looking like nice pinpoints. Check out the below image and 100% corner crop.

Below are some image samples for your viewing pleasure. Most of these have had contrast and curves adjustments applied in Adobe Lightroom, particularly the Zion Canyon shots which required a bit of work from the harsh light.

Where I think the Rokinon 8mm f/2.8 UMC Fisheye II becomes something special is when it’s defished. I recently posted a guide on how I defish and correct for the distortion of fisheye lenses in my “Best Method of Defishing a Fisheye Photo” article. The samples below have been defished with the method outlined in that article. With this method, the photos retain almost all of their original field of view, making for an extremely wide angle photo that you can’t get with a normal rectilinear lens.

For astrophotography, this lens shines. It has a ridiculously wide field of view which makes it possible to use shutter speeds of up to 60 seconds without significant star trailing when your camera is set to Bulb mode. This makes it great at gathering light for astrophotography and makes it possible to capture nearly the entire arch of the Milky Way, even when it’s high in the sky.

In terms of image quality, the new Rokinon 8mm f/2.8 UMC Fisheye II is an excellent lens, provided that you get a good copy. It’s relatively fast f/2.8 aperture makes it great for astrophotography. Along with the Rokinon 12mm f/2.0 (my review here), there are now two really excellent landscape astrophotography lens options for mirrorless camera shooters from Rokinon. Hopefully this is a sign that Rokinon/Samyang will continue to develop small, compact lenses for mirrorless cameras in the future.

The wide field of view allows for exposures up to 60 seconds without significant star trailing. It’s a real challenge to learn how to compose a photograph with such a huge field of view (I often found my fingers in the photographs) but some practice and patience can result in some excellent shots that could not otherwise be created with a rectilinear lens. I personally think that the fisheye distortion can be rather silly looking but shooting with the lens with defishing in mind leads to some excellent “more serious” photographs that can hold their own against similar shots made with rectilinear lenses. For astrophotography, if you’re looking for the easiest way to capture as much of the Milky Way as possible, look no further than a fisheye.

Overall, the lens is great and I honestly have nothing to complain about except that my first copy was bad.