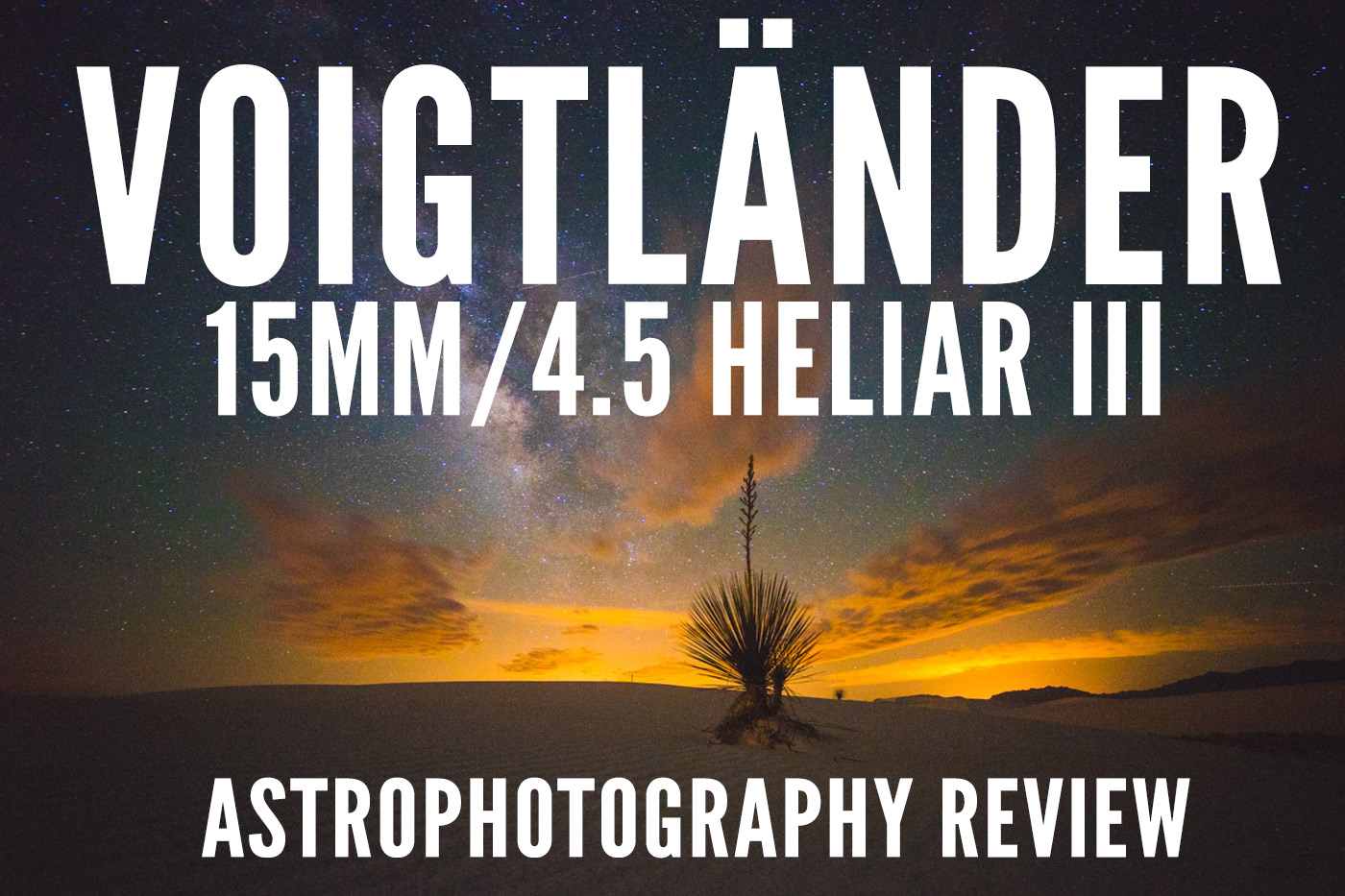 I recently had the opportunity to shoot some astrophotography with an interesting lens: the Voigtlander 15mm f/4.5 Heliar III. With its rather modest/slow/dark f/4.5 aperture, the 15mm Heliar III isn’t the most obvious choice for shooting the night sky, but in reality it actually performed well, especially when paired with the Sony a7II. This review is as much a test of the lens as it is an experiment shooting the Milky Way with a slow lens. Read on for more about my experience shooting the night sky with the Voigtländer 15mm f/4.5 Heliar III.

The Voigtlander 15mm f/4.5 Heliar III is a unique lens that’s made for M mount cameras like the digital Leica M, but it’s also easily adaptable to other mirrorless cameras. It’s notable as one of the widest-angle lenses available for digital full frame mirrorless cameras and rangefinders. It has a super wide 110 degree field of view on a full frame sensor — perfect for shooting wide sweeping landscapes. I recently published my complete real-world review of the Voigtländer 15mm f/4.5 Heliar III lens over on The Photon Collective with details about the intricacies of the lens, quirks of use and lots sample photos (especially landscapes and adventure photography). This astrophotography review is intended as an extension of that review. You can open the full review on Photon Collective by clicking the image below: 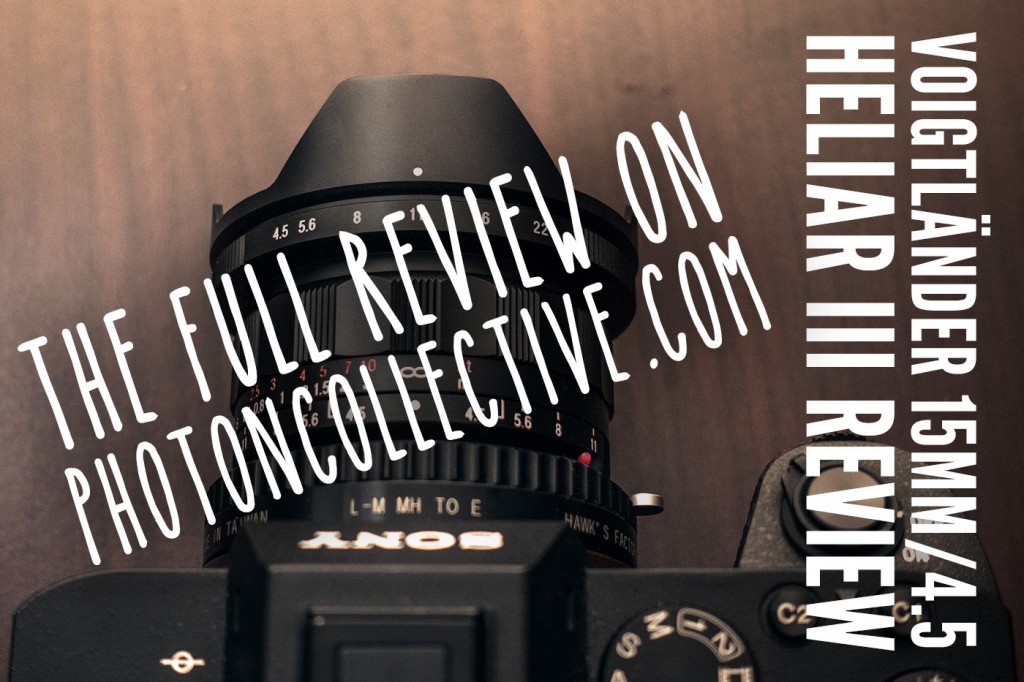 I spent several weeks shooting the deserts of California, Nevada, Arizona, New Mexico, and Texas as part of our road trip across the American Southwest. You can get updates on our progress at North to South. I have had the Voigtländer 15mm Heliar III mounted to my Sony a7II via the Hawks Factory Leica M to Sony E Mount Adapter V5 for the entire road trip so far. I’ve found it a joy to use. The build quality of the 15mm Heliar III is top notch: it’s compact but well made and still feels substantial and well balanced on the a7II. 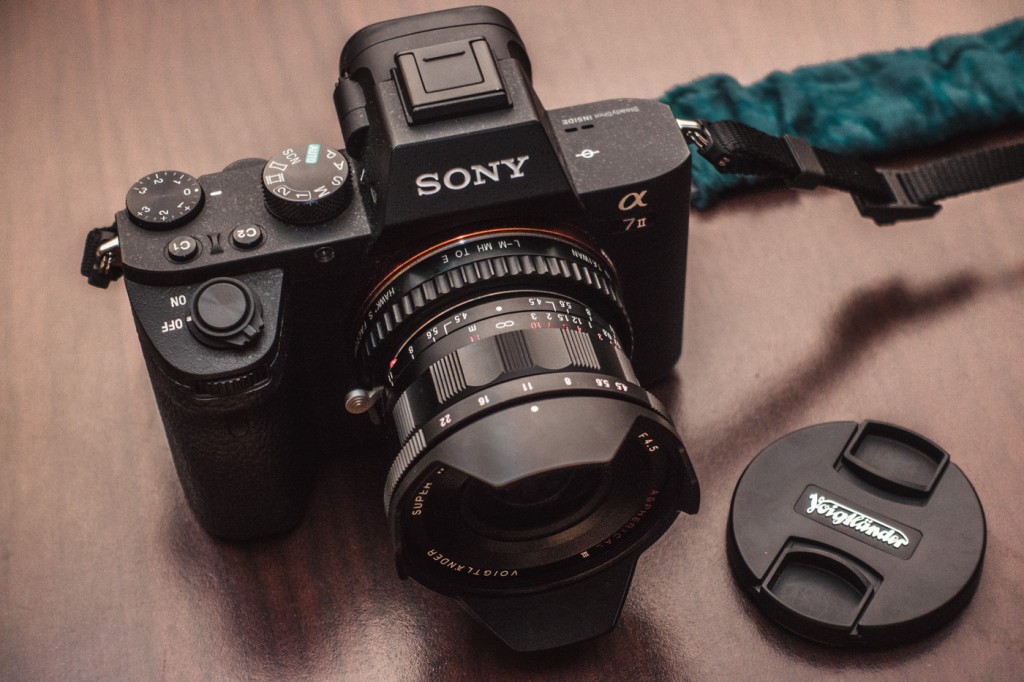 During my time with the lens, I, of course, used it a bunch at night for shooting the night sky. I initially figured that f/4.5 was a little bit slow for landscape astrophotography, but the 15mm Heliar III performed admirably, particularly paired with the full frame sensor on the a7II. All told, it’s about optically equivalent to a comparable 10mm/2.8 lens for an APS-C camera in terms of total light gathering power. With its relatively slow f/4.5 rating, making photos with a typical Milky Way exposure setting will usually result in a little bit more relative noise than if you were using a more appropriate lens. 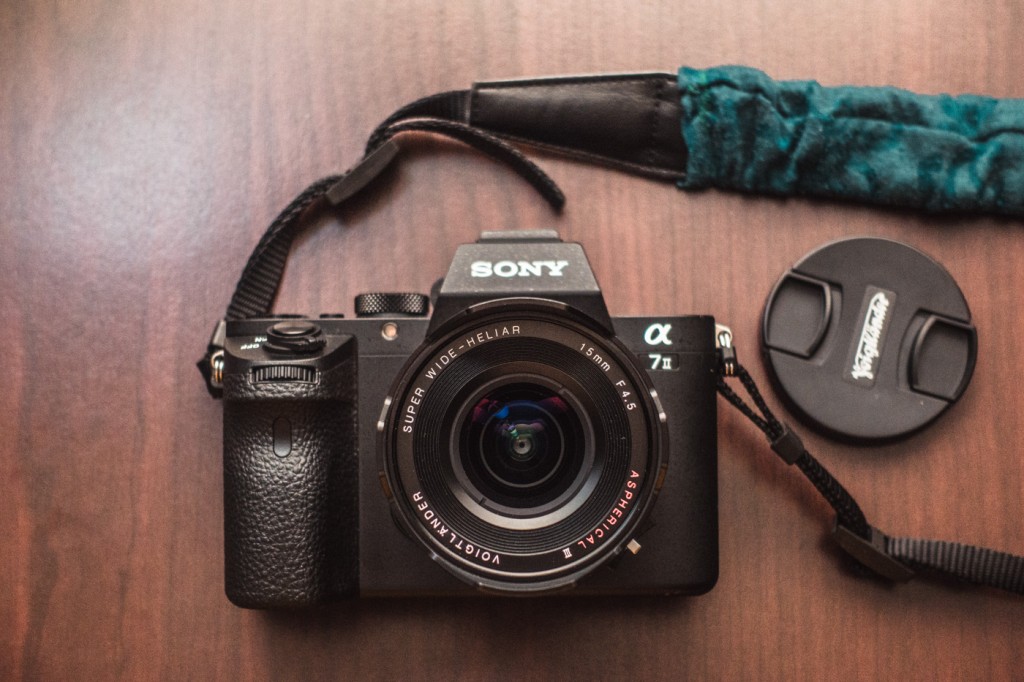 As you probably already know, I like pushing photography gear to its limits, and the 15mm f/4.5 Heliar III seemed like a prime candidate to do the last thing most people would think of doing with such a slow lens: low-light shooting. I had two distinct opportunities to use the lens for shooting the Milky Way: The first was a brief session at Valley of Fire State Park in Nevada with only a short window of time between the rise of the Milky Way and moonrise.

The second opportunity was during a backcountry backpacking trip at White Sands National Monument in New Mexico, the same place where I made the photos for my recent smartphone astrophotography article. Both desert locales offered very different conditions. Valley of Fire was very warm at night with hazy clouds and lots of light pollution from Las Vegas, while White Sands was cool and damp from a recent rainstorm with very dark skies but lots of light pollution being reflected off of thick, fast moving clouds. The 15mm Heliar III did much better than I expected for an f/4.5 lens, in large part, I’m sure, due to the excellent sensor on the Sony a7II.

All of the sample images on this review were made on the Sony a7II and processed in Adobe Lightroom 5.7.1 and/or Adobe Photoshop CS6. The full resolution images are downloadable via the caption links.

I’ll be honest and say that a faster ultra wide angle lens like the Rokinon 14mm f/2.8 (full review) is better suited to astrophotography over the Voigtländer 15mm/4.5 Heliar III. A faster lens (lower f/number) will always allow the camera to collect more light and produce a less noisy image. I talk about this in more detail on my ‘how to pick a lens’ article. That said, the 15mm Heliar III also comes with the advantage of being significantly smaller, lighter, sharper, better built and easier to use than the cheaper Rokinon 14mm and many other comparable full frame ultra wide angle lenses. If you’re willing to compromise a little bit of lens brightness for the other benefits that the Heliar III presents, its performance is actually quite good at night with the right technique.

Right from the starting gate, it should be expected that shooting untracked landscape astrophotography with an f/4.5 lens will tend to produce noisy results. Shooting with the 15mm Heliar III is no exception, but there’s a trait that helps the lens out: field of view. The 15mm Heliar III has an ultra wide field of view of about 110°. That’s really wide. Wide enough that the slow motion of the stars across the sky (from Earth’s rotation) won’t be very apparent relative to the total field of view. Basically, the extra field of view makes it possible to use very long exposure times — in excess of 30 seconds if needed — in order to gather more light. Being able to use these extra long shutter times helps compensate for the lens’s relatively small aperture. In general, the longer we can expose the image, the more light the sensor can collect and the less apparent noise there will be in the image.

I found that shooting at f/4.5 with a 30 second shutter time collected adequate amounts of light without showing too much star trailing at normal viewing distances. WIth a 30 second exposure time on the a7II’s very high resolution 24 megapixel sensor, there’s definitely some noticeable streaking of the stars when viewing the photos at 100% magnification, but it’s not apparent when you’re looking at the photo as a whole. I tended to keep my ISO at a moderate 1600 for most of my shots, which provided a good balance of brightness and dynamic range.

At the time of this writing, there are only a select few full frame digital cameras that this lens is really suitable for: the Sony a7, a7S, a7R, a7II and the various digital Leica M cameras. You can also adapt it to various APS-C and Micro 4/3 mirrorless cameras, but there are more appropriate (and typically faster) lenses for those cropped sensor cameras that offer a similar focal length (e.g the Sony E 10-18mm/4, Fujifilm 14mm f/2.8, and the Leica 15mm f/1.7, etc.).

While I don’t yet have any experience with a digital Leica, I can at least attest to the quality of the Sony sensors, having used most of the variations of their Exmor sensor. Where these sensors really show their strengths is in situations like this (low light conditions with a slow lens). The amount of shadow detail still visible in even the darkest parts of the image is just amazing. Since the 15mm Heliar is so slow, what I initially thought would be a brief experiment that would keep me from ever again using slow lenses for astrophotography ended up becoming a testament to how great modern digital sensors really are.

One of the biggest positive traits of this lens is that it shows almost no detrimental aberrations in the corners of the image while shooting the stars. Coma and astigmatism seem well controlled and the stars keep their pinpoint shape at normal viewing distances. If you look really really close, there’s perhaps a small amount of tangential astigmatism in the very corner at f/4.5 (look at the bright star Altair in top left corner of the image below), but it’s downright minimal. Almost no apparent aberrations indicates that the lens was very well designed and is likely an explanation for why the lens is so sharp.

One of the best benefits of using the lens on the a7II with the helicoid adapter is the ability to calibrate the infinity focus stop for critical focus. This capability makes night sky focusing as easy as just turning the lens to infinity. No need for scrutinizing the focus on the LCD — just set it and forget it. This benefit alone is a very desirable trait for photographing the Milky Way, and a consideration for choosing an adapted manual lens like the Voigtländers. If you’re mounting any M mount lens on your Sony E mount camera, get the Hawks Helicoid V5 Adapter, too, if only for the ability to calibrate the infinity stop. It makes the experience with the lens excellent.

Overall, my experience shooting astrophotos with the Voigtländer 15mm f/4.5 Heliar III exceeded my expectations. It’s rather sharp and shows very few aberrations. It’s not the brightest lens around, but its excellent build quality, excellent image quality and compact size seem to outweigh the shortcomings it has in the speed department.

The lens’s extra wide field of view makes it possible to easily use a 30+ second long exposure without too much star trailing. Being able to use these extra long exposures helps compensate for the smaller aperture, and as a result the lens manages to produce some decent astrophotos, particularly when paired with a camera like the Sony a7II. The lens trades a little brightness for more portability, excellent ergonomics, and excellent image quality. It would be a fine choice for a compact ultra wide angle lens on any of Sony’s or Leica’s full frame digital cameras. As a result, I can actually highly recommend this lens for daytime shooting and astrophotography alike, a conclusion I did not expect.