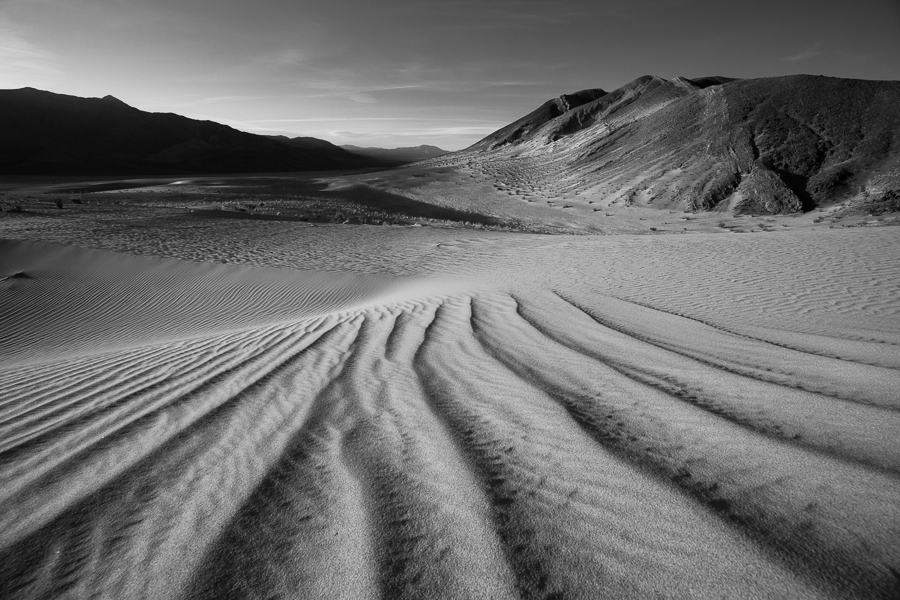 A three mile hike across the open desert led us to a hidden treasure.

The Hidden Dunes are some lesser known sand dunes in Death Valley National Park. They are relatively close to the Eureka Sand Dunes, but they are obscured from view of the rest of Eureka Valley by a  pair of small mountains. Diana Southern, Cody Smith and I made the trip on March 23 for the sole purpose of photography. I primarily wanted to make the trip to see what could be accomplished in an overnight photography workshop. I plan on launching my first workshops for lonely speck in April and so I made this trip as a sort of extreme example of a test workshop. 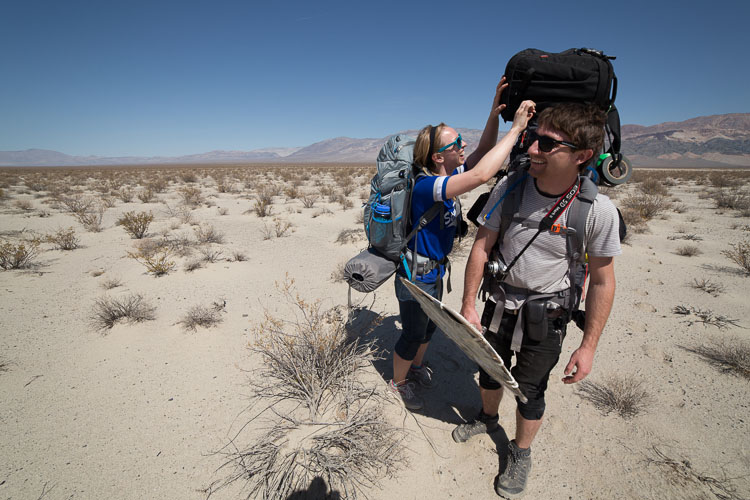 As I mentioned in my Preparing for Hidden Dunes post, I tried to reduce my pack weight a bit. It still turned out to be heavier than I would aim for in the future at about 35 pounds dry. Add nearly two gallons of water (it’s dry in the desert) and that’s nearly 50 pounds total. But that’s nothing compared to what Cody Smith packed. Cody lugged three cameras (a DSLR, Medium Format TLR, and a 35mm Rangefinder), lightmeter, tripod, gaffer’s tape, a four person tent, a heavy duty sleeping back and 22″ round mirror from IKEA for photograph idea. Add water, food and other misc items and his pack was just ridiculous in size. We even had to strap his extra camera bag to the top of his backpack, despite the fact that his pack was already 1.5 times the capacity either my or Diana’s pack. Diana was the only smart one this time around, packing only a tripod and her DSLR with a pancake lens in addition to her camping gear. Her pack probably weighed less than 30 pounds.

We entered Death Valley National Park from Big Pine Road and took the long Eureka Dunes dirt road to a hard to find, unmarked side road (we missed it the first time). At the end of the road, we strapped on the packs and set out to the west toward a small triangle of sand peeking out from behind two dark rocky mountains. The air was cool and crisp, balanced with a friendly warm sun and a nearly cloudless sky. We could see our destination in the distance and the only thing between us and it was about 3.5 miles of flat valley floor, evenly scattered with thousands of cresote bushes. 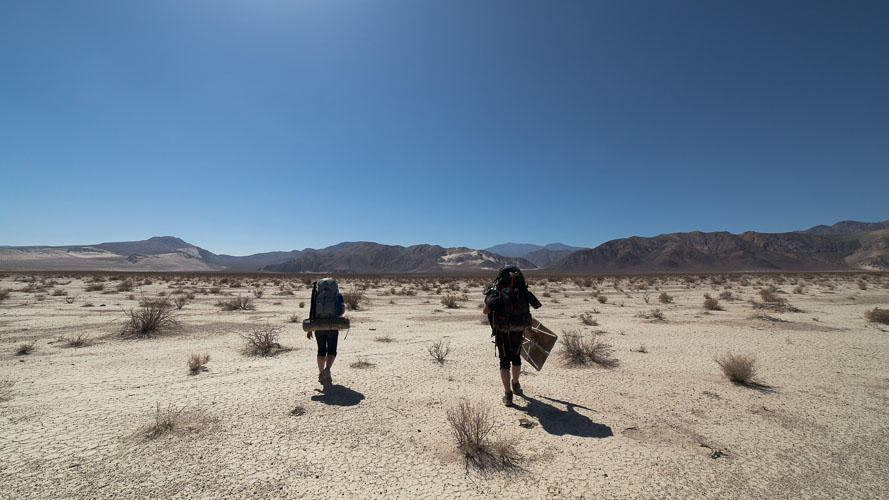 As soon as we reached the two dark mountains in the distance, we were immediately on the dunes. They appeared from hiding as we rounded the corner, seemingly out of nowhere, living up to their name perfectly. After setting up camp and taking a quick rest, we took advantage of the late afternoon sun to make the photographs for which we made the trip. I decided early on the trip that I would compose for black and white shots almost exclusively. The decision is mostly based on the subject matter; sand dunes are a paradise of patterns and contrast. I can think of few subjects better to capture in black and white and the Hidden Dunes are no exception. 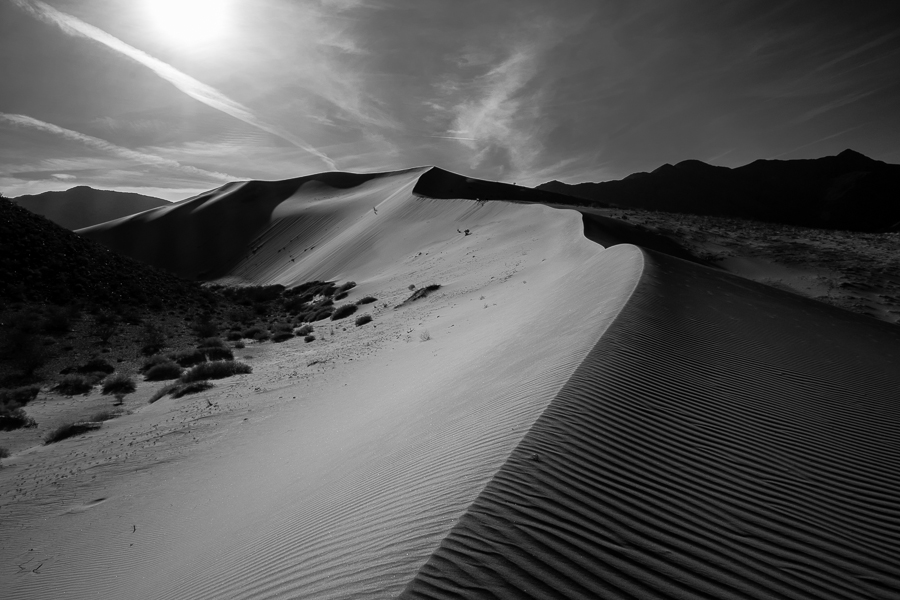 The first mountain of sand extended out with a long spine that ran all the way to the top of the dune; it beckoned us to climb to the top. The sand was perfectly combed with ripples and patterns that looked almost too perfect, as if someone spent years raking a giant sloped zen garden. I stayed mesmerized by the variety and beauty of these patterns, many of which seemed more unique than what I had seen a year before at the Panamint Dunes. 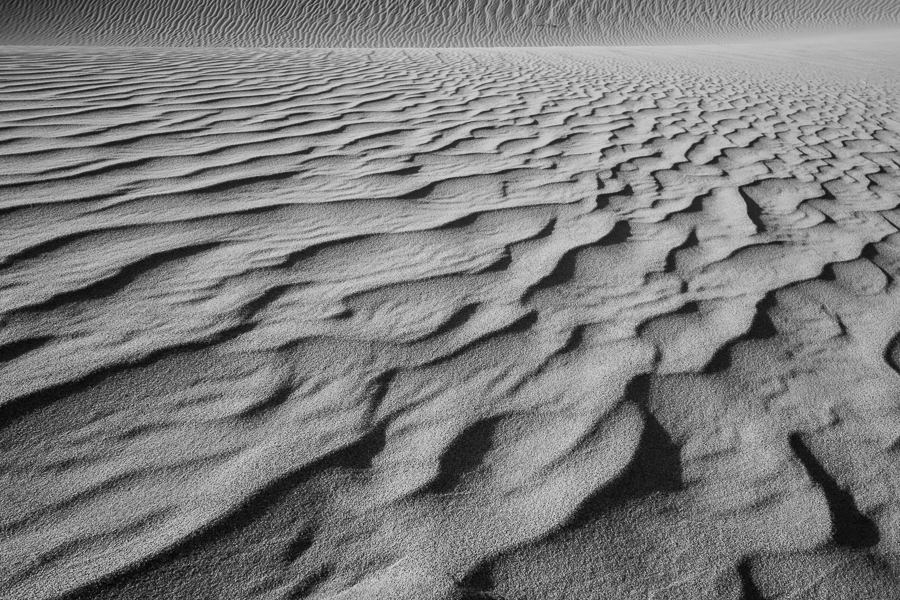 On the ascent, any object in the sand made an effect on the patterns etched in the sand.  On the climb up this first spine of the dune, I found a branch lodged in the that disrupted the zen mountain slope: 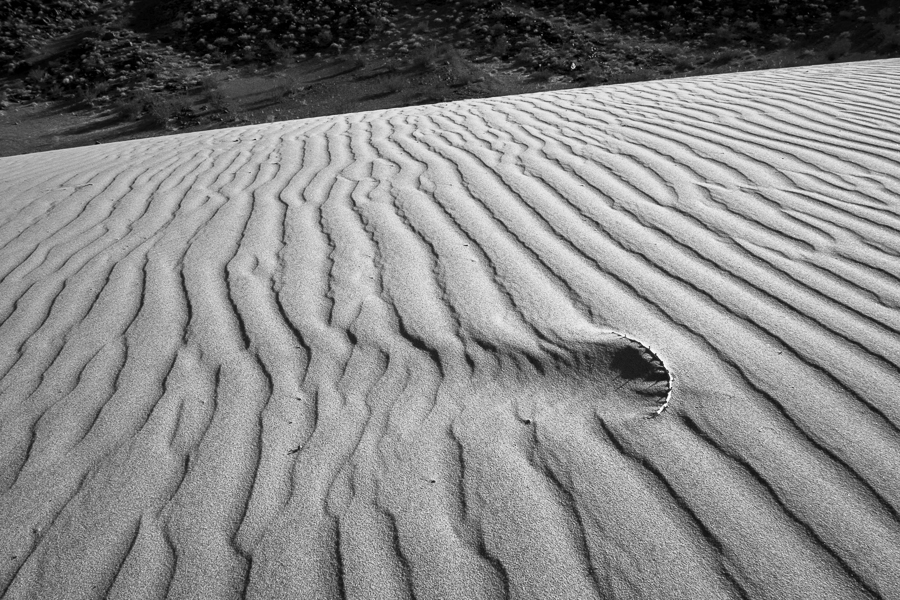 Once up to the top of the first sand dune peak, we could look to the north long the edge of the dark rocky mountains out to a long open valley with distant mountain peaks on the horizon. The soft sculpted dunes stretched out into this valley for several miles, dusting the base of the nearby mountains with a skirt of lightly colored sand. The sand here was extremely fine and soft, much more so than the Panamint Dunes. The first afternoon, we hiked entirely barefoot which was a nice break from the earlier trek in hiking boots. It’s a strange visual contrast that the white sand dunes created against the jagged sharp black rock mountains.

When I would stop to take my breath, the only thing I could hear was the sound of my heart. It was unbelievably quiet when we sat still, as if someone turned off our ears. The only similar experience I’ve had to the pure silence of the empty desert was in a closed anechoic chamber. This is a stark contrast from my apartment in Venice where the sounds of the boardwalk are perpetual, where sirens blare every night, and drivers lean on their horns as they cut off each other on their morning commutes.

As the sun hung low to the west, it highlighted the curves and peaks of the dunes to the south of the first peak, highlighting the smooth channels on the leeward side of the dune spine. In the distance, the sand extended up the cradle made by the rocky mountains, creating more triangular peaks and dome shaped faces. 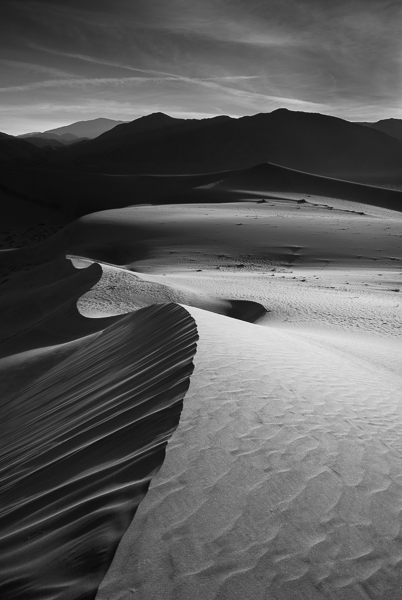 To the East, looking back toward the way we came, the waxing gibbous Moon was rising into a gradually darkening sky: 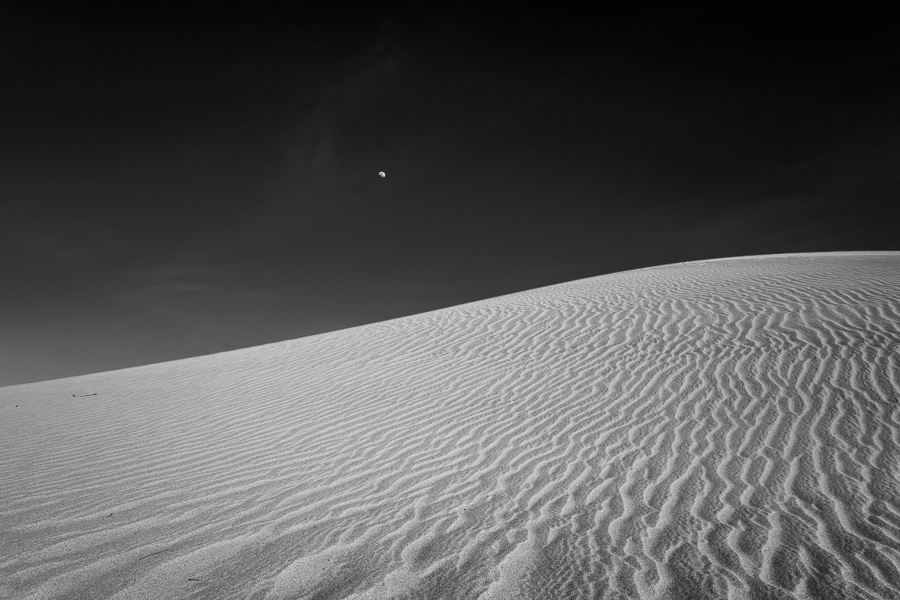 When the sun finally set, we literally bounded back to our tents at the base of the first sand dunes and prepared ourselves to wake at 3am, just before the Moon would set. I was giddy with the results of the day and could barely fall asleep thinking of the photographs I wanted to make in the dark of the early morning as the moon projected its faint rays across this amazing place.

I’ve posted more photographs of the daytime Hidden Dunes on my portfolio page here. Check the blog a little later for my post on nighttime photography at the Hidden Dunes.