Rounding the bend to Trona Pinnacles is like initiating the entry burn into the atmosphere of an alien planet.

Miles in the distance you can see the row of hundreds of spire like structures, rising from the barren landscape like an extraterrestrial city.
Trona, California is known by few and those who have ventured to its hot and barren landscape will arrive with the feeling that they have left the Earth for some sort of hell-like desert planet on the far side of of a distant galaxy, too close to its star to harbor life.

The Trona Pinnacles are a photographic gem hidden in the California Desert; just skirting the southern edge of Death Valley National Park, they lay 10 miles south of the dying mining town of Trona, California.

When you first see them in the distance, they appear small and numerous, little rocky things sticking out of the desert floor. But, then you pass a sign that reads: Trona Pinnacles: 5 Miles.

“Whoa, those things are five miles away?”

It’s only then that you realize that those rocky spires are much larger than you initially thought. They span an area of nearly 4000 acres. Far away from any high traffic roads and accessible only by a washboard road that would seem to shake most vehicles apart, the Trona Pinnacles are a collection of over 500 jagged and rocky calcium carbonate formations called tufa, many of which rise nearly 150 feet from the rock scattered desert floor.

My girlfriend and I recently scouted this strange and beautiful place to see if it was suitable as a location for my Astrophotography Workshops. After roaming around the washboard roads for an hour or so, we found an empty spot to set up our primitive campsite, take some photos and eat before the sunset.

It was a full moon that night so the best time for night photography would be early in the night as the moon was still low in the sky. There would be no Milky Way visible tonight; the moon was bright and positioned right in the sky where it would obscure our view of the dim river of stars.

But the moon offered us well defined shadows across the landscape, lighting our way enough that we needn’t any flashlights to navigate the jagged terrain. It was a great opportunity to light-paint the landscape during our long exposures. Check out the light painted image that Diana helped me make below. Hover to see the unpainted version. 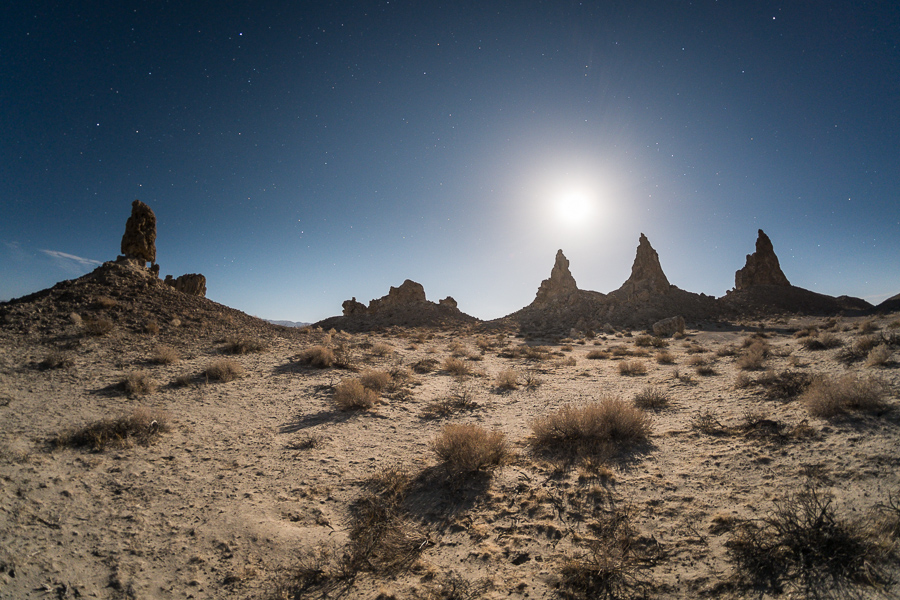 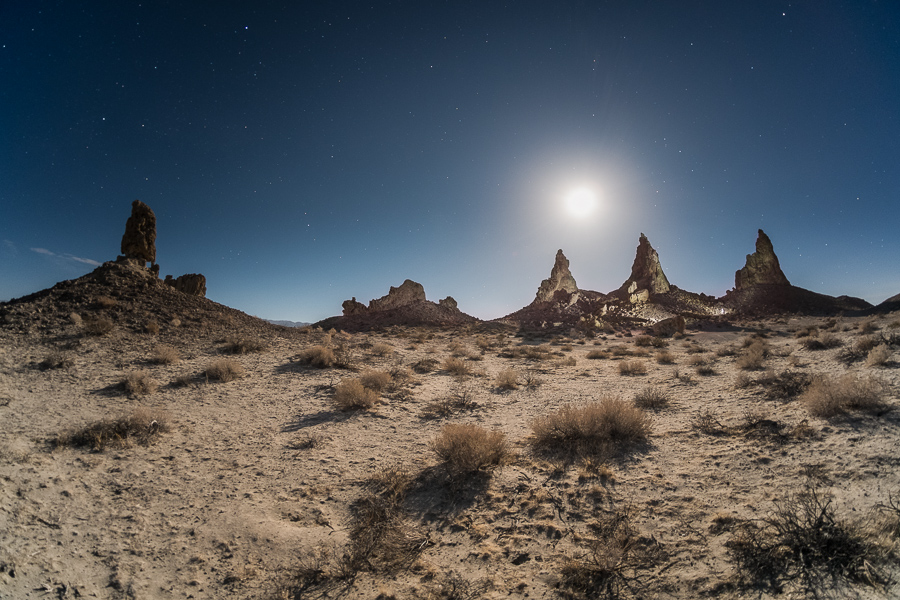 The visit was brief; we were able only explore a small portion of the area that night. But even with only one quick stay to familiarize ourselves with the location, I knew it was a perfect workshop location. It offers a great view of the southern sky, clear desert air and a tremendous amount of diversity in the landscape. To add icing to the cake, the light pollution levels are relatively low and should offer astrophotographers with dark enough skies to photograph the Milky Way on moonless nights.

I highly recommend visiting Trona Pinnacles if you get a chance. It’s certainly a unique and little known location of great beauty. Check out the Bureau of Land Management page for the Trona Pinnacles for more information about the area.

This is a place that I will definitely revisit often for its stark and desolate beauty. Look forward to upcoming astrophotography workshops at the Trona Pinnacles on the Workshops page.

One Reply to “Under the Full Moon in Trona Pinnacles, California”