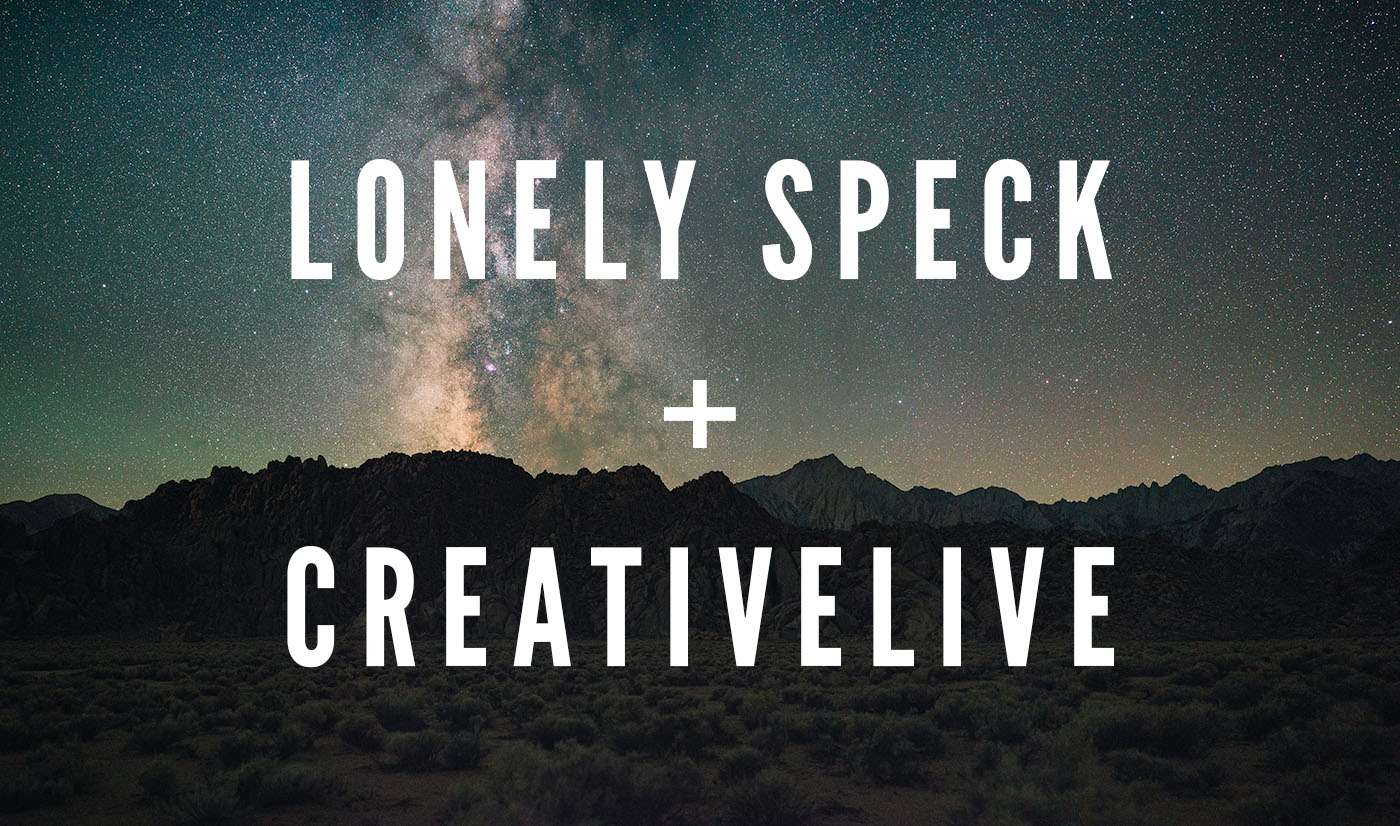 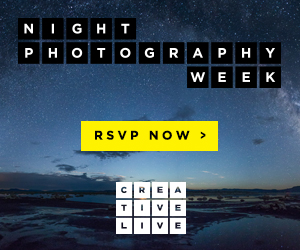 If you’re not already familiar, CreativeLive puts together some amazing online classes on all sorts of creative topics like photography, design and entrepreneurship. I’ve watched many CreativeLive lessons and interviews, many of which actually helped me out in the early days of developing Lonely Speck. All of their classes are available for free if you watch them live. When we were presented with the opportunity to demo the SharpStar2 during an actual CreativeLive lesson, we couldn’t pass up the offer.

Diana and I drove several hours north of Los Angeles to meet with Lance and the CreativeLive film team in the Alabama Hills near Lone Pine, California. Our first day was just a day of scouting but it ended up being an amazing night of meeting new friends, shooting astrophotography and observing an amazing space related event. When we arrive on our first night in Alabama Hills, the sun had just set and we quickly joined the CreativeLive team to start scouting for shooting locations.

Eventually, the team settle on shooting the initial night of shots at Lady Boot Arch, a distinctly shaped rock formation in the Alabama Hills, aptly named for its distinct high-heeled shape. The team set up their video lights and started with some preliminary photography while Diana and I sat back and watched while messing around with our own equipment. I had just picked up the latest Zeiss Batis 18mm f/2.8 lens and this was our first outing with the lens so I spend most of the first hours of the night shooting some stills and video for my own upcoming review of the lens.

We were also joined by another night photographer friend, Rick Whitacre, while in Alabama Hills. I’ve followed and chatted with Rick many times over email and he actually helped introduce the SharpStar2 to Lance. That introduction in turn opened up the opportunity to work with CreativeLive. (Thanks Rick!)

While Diana and I were chatting with Rick about the new Zeiss Batis, and I was fiddling with mounting the lens back on my camera, I noticed a strangely bright light to the west, over the skyline of the Eastern Sierra Nevada mountains. It looked like a slow moving meteor and it was progressing across the sky and becoming ever more brilliant by the second. Completely aghast at the huge fireball I was seeing in the night sky, I immediately pointed it out to Diana and Rick and we started shouting out to everyone else in the team to look at what what happening in the night sky. I, of course, quickly hit record on my Sony a7S (full review) and recorded the event as it unfolded. Check out the video I capture below. (Video Warning: Profanity)

We didn’t know exactly what we were seeing at the time. It was a very unusual sight to see such a bright thing streaking across the night sky. I’ve seen my fair share of meteors and satellite passes and this was a whole new experience. After some research after the event, we eventually confirmed that it was the expended upper stage of a recently launched Chinese space rocket, the Chang Zheng (Long March) 7 Rocket. As a former aerospace engineer, I’ve seen rocket launches before but never witnessed a re-entry. It’s usually more common for expended rocket parts to re-enter over an unpopulated area so it’s a rare sight that was pretty awesome to capture. Also check out the footage that the CreativeLive guys managed to capture.

After witnessing the re-entry, Diana and I quickly raced back to our laptops to upload the video to share with the world. Overnight, the video was picked up by numerous new agencies including PetaPixel, CNN, Slate, Space.com, and the Associated Press. After our rushed exercise to post the video of the fireball online, I returned later in the night to the area around Lady Boot Arch to join back up with Lance and Rick to shoot a few more photos before the end of the night.

At this point in the night, the CreativeLive team had already packed up their gear for the first night of scouting so I had a good opportunity to shoot a few unlit shots of the area and chat with Lance and Rick among the quiet desert of the Alabama Hills.

Alabama Hills is by far one of the most spectacular and most accessible areas for shooting the Milky Way. Extensive dirt roads, originally made by Hollywood film crews for shooting many of the most popular classic western movies make nearly every part of the rocky area accessible by car. The hills are adjacent to the base of the tallest mountains in California and the contiguous United States including the iconic Lone Pine Peak and Mount Whitney.

Eventually, just as Lance, Rick and I were packing up for the night, I made one last shot of the Eastern Sierra Nevada mountains. While I didn’t realize it before making the shot, the waning crescent moon had just peaked over the horizon and started illuminating the mountains. It was the last shot I made that night but definitely my favorite. I tend to shoot during the new moon when the skies are the darkest and I think I’ve forgotten how amazing a little bit of moonlight can be in a shot.

Milky Way over Lone Pine Peak. Diana (@northtosouthtravel) and I were out last night with @lance.keimig and more friends shooting some night photography. Got to witness the re-entry of the CZ-7 upper stage and got some great photos of the Milky Way with the new Zeiss 18mm/2.8 Batis. Captured this one just before leaving as the crescent moon started lighting up the Eastern Sierras. Pretty awesome night! Sony a7S, Zeiss Batis 18mm, f/2.8, 15s, ISO12800, stack of 8 exposures. #lonelyspeck #milkyway #nightscapes #alabamahills #easternsierras

On our second day, we had our shooting time scheduled for an hour after sunset so we drove back out to the area around Lady Boot Arch during a particularly colorful sunset. The Eastern Sierras are often called “The Range of Light”, the name coined by John Muir when describing the beauty of the Sierra mountains. It only takes a day in this amazing place to understand what John Muir was talking about.

By the time we arrived to the shooting location, the CreativeLive team was already well underway with filming. We’ve never witnessed a professional shoot like this so it was a cool learning experience for us, especially as we’re just starting to expand our efforts to learn about filming and produce more videos for the Lonely Speck YouTube Channel.

Diana and I sat back while watching the team shoot one of Lance’s lessons in astrophotography for the CreativeLive course. I was especially fascinated by some of the cool history of night photography that Lance shared in his lessons and I’m genuinely excited to see the final lesson in the actual course.

Once it was our shooting time, I joined Lance in front of the camera to demonstrate the SharpStar2, our new tool for assisting with focusing at night. The SharpStar2 is a tool that I developed to work with most camera lenses to provide an easy way to confirm perfect focus on the stars while shooting astrophotography. You can order the SharpStar2 here.

The demo of the SharpStar2 will be part of Lance’s lesson section on focusing at night when the lessons air during the CreativeLive Night Photography week. I’d really love if you join in on the free lessons and check out my demo of the SharpStar2. (Let me know how I did!) Use this link to RSVP for the free Night Photography Week lessons or click the banner below. The lessons will only be free while they’re being aired live from September 12-16 so definitely get yourself RSVP’d and add it to your calendar!

After our short filming session, we concluded the night by shooting a few more photographs of the night sky, this time with my Sony FE 55mm f/1.8. I’ve been working on a few new techniques that I want to perfect and write about so I took our last night in Alabama Hills as an opportunity to capture some new photos.

The first new technique is focus stacking, a method to ensure both a sharp foreground and background, especially when using longer lenses (like my 55mm). The first example I managed with a focus stacking technique was the above shot of Diana standing below the Sierras and the colorful Rho Ophichi Cloud Complex, one of my favorite parts of the night sky. In it, I combined numerous exposures, some of which were at different focus points to ensure that both Diana and the night sky were in perfect focus. I’m still working on the technique but I’ve been getting some great results. I’ll soon try to publish a tutorial on focus stacking alongside all our Astrophotography 101 lessons.

Midnight at the Alabama Hills. Diana (@northtosouthtravel) and I had a great time with @lance.keimig and the @creativelive team. It was a pleasure to be a small part of their preparations for their upcoming night photography week September 12-16. Practicing and improving my panorama stitching techniques before the #lonelyspeckmeetup later tonight. Nothing quite like shooting a 70MP landscape astrophoto that has nearly no noise. Sony a7S, 55mm f/1.8 @ f/2.8, 48x5s, ISO12800 #lonelyspeck #nightscapes #milkyway #alabamahills #easternsierras

The second technique I’m working on a tutorial for combines my two favorite night photography techniques: image stacking for noise reduction and panorama stitching. I made my first noise-reduction stacked panorama at the end of the night and a preview of the result is above. The final resulting photograph is 70 megapixels and has extremely low noise and fine details throughout. I’m really loving the results from this technique but I’m still working on refining the workflow and post-processing. When I get it more refined, I’ll definitely put together a tutorial.

It was an eventful two nights for us and I’m glad I got to walk away with some good photos. Lance and the CreativeLive team stayed out shooting until sunrise that night and stayed around Alabama Hills for several more nights of shooting. I’m happy to have been a small part of the project and I can’t wait to see the results.